The history of ConFoot

In the early 2000s Timo Akela, CEO of ConFoot, was presented with a frustrating logistical problem. His close friend, Veikko Salminen, ran a small business importing furniture from Estonia and delivering it to retailers in Finland. The entrepreneur had limited resources at the time including a small fleet of trucks.

Arriving at the retailers, Veikko would have to wait for the staff to unload the furniture. The store did not have a dedicated stock or warehouse team. Therefore unloading would often take so long that they asked him to return the next day to collect the emptied container. This was wasted time, reaching a point where Veikko had three containers standing at the retailer’s loading bays at the same time. With his trailers all tied up, turnaround was slow. It occured to Veikko that he could not be the only transport company experiencing such issues.

Consequently, he turned to Timo for help, citing a need to resolve the problem.
How to remove a shipping container from a trailer without using expensive equipment?
Timo set about providing a solution. He formed a team with Veikko and Terho Närevaara (Timo’s brother-in-law). Together they envisioned a lightweight, low-cost set of legs or struts that could be used to easily unload a shipping container from a trailer. These would be fitted to the corner casting and a truck would simply have to lower the air suspension of its trailer and drive away, leaving the container behind to be unloaded. Thus, greatly increasing the productivity of the driver.
Unfortunately, this task was far from simple. The team at ConFoot was determined that the final product would be;
It also had to be able to withstand rigorous testing and meet all the safety regulations described in the European 2006/42/EC machinery directive. 3D modeling, stress tests and strength calculations also had to be carried out. 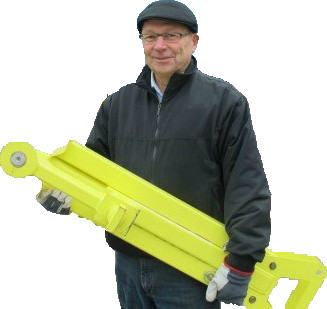 The concept of the functionality of the product was simple, but the design process, far from it. A multitude of experts and engineers worked on the project and were consulted along the way. Finding a solution which created the perfect structural layout, material combination and lightweight nature (all at the same time) proved an extremely time-consuming and complex endeavour.

The complete research and development stage spanned over a decade. A collaboration with Helsinki-based university Metropolia and various engineers led to initial prototypes which were ready for testing. Multiple protoypes were produced, such as the ‘I’ shaped version shown on the right, and other primarily aluminum based models. However, these attempts did not meet the high standards Timo and his team were searching for. The designs were not strong enough, portable enough or durable enough.
With the prototypes coming along, Timo established ConFoot OY formally as a company in the harbor-side Helsinki office. Finally, in 2013, a breakthrough was made and a patent for the innovative design established. The team discovered a specific blend of 6 different types of high strength, quality Finnish steel to construct the product. This combination allowed the ConFoot leg to support loads up to 26 tons and only weigh 24kg. Furthermore, in response to customer feedback, additional improvements were made. A design was implemented allowing the legs to fold (increasing portability), adjust in height to ease operation and raise the maximum weight capacity to a staggering 30 tons.
Since then slight variations to the models have been made as the team continues to perfect the product in accordance to customer needs and feedback. 3 different models are now available which you can read about here. ConFoot products are currently being sold across Europe, Australia and more.

Send us a message